HIV Ireland invites all General Election 2020 candidates to voice their support for the #HIVManifesto which aims to end new HIV transmissions, combat stigma and improve services for people living with HIV. 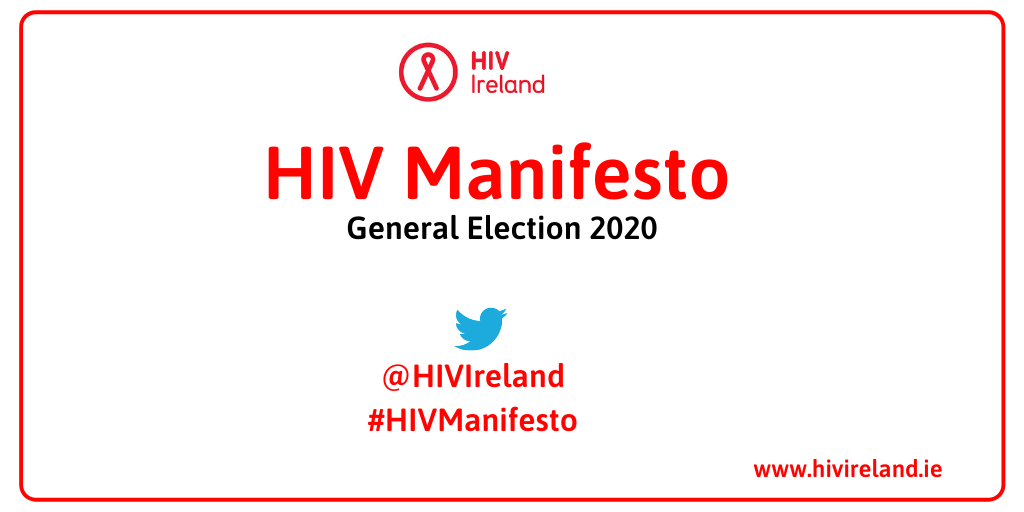 We are calling on the next Government to:

1. Deliver on the commitment to end new HIV transmissions by 2030.

In 2019, the Irish Government stated publicly its commitment to ending new transmissions of HIV in Ireland in line with the global Fast-Track Cities initiative and the UN Sustainable Development Goals. Currently, Ireland lags behind other EU Members States in ensuring that 90 percent of people living with HIV know their HIV status, 90 percent of those are on effective treatment and 90 percent on effective treatment reach an undetectable viral load, meaning they cannot pass on HIV through sexual intercourse.

An updated National Sexual Health Strategy for Ireland should include measures to improve access to HIV and sexual health services, and commitments to reach global targets for the reduction of HIV transmission.  Increased investment at the intersection of existing strategic priorities on sexual health, mental health and addiction should also be made.

3. Deliver on the Fast-Track Cities target to achieve zero HIV-related stigma and discrimination.

4. Invest in public health and fully fund HIV services to meet the needs of all communities.

5. Deliver on the statutory commitment to review the legislation that criminalises the purchase of sex.

6. Develop and resource early harm reduction interventions for those engaged in chem sex.

The popularity of more potent drugs for use in chemsex, particularly among gay and bisexual men and men who have sex with men, is leading to an increase in related harms, addiction issues and unprotected sex among users. Measures to strengthen early harm reduction responses to emerging trends and patterns of drug use should be adopted.

7. End the discriminatory 12-month deferral period on blood donations for gay, bisexual and men who have sex with men.

The best available scientific evidence and advances in testing technology mean that the current 12-month deferral period imposed on gay, bisexual and men who have sex with men exceeds what is required to maintain the safety of the blood supply. Efforts must be made to remove the current discriminatory practice and replace it with an evidence-based individual risk assessment for all blood donors.

The number of people living with HIV in Ireland is estimated to be between 8,000 and 10,000. The provision of locally accessible peer support services run by and for people with lived experience of HIV, particularly for those who are newly diagnosed, allows people to benefit from physical, emotional and practical supports.