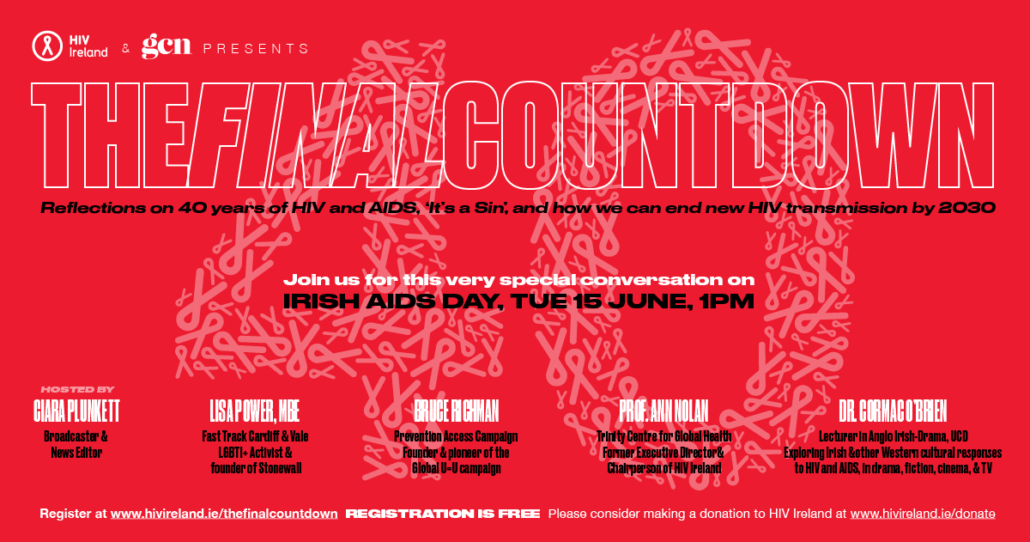 HIV Ireland once again teamed up with GCN to present a special lunchtime online seminar to mark Irish AIDS Day 2021 on June 15th.

Hosted by award-winning broadcaster Ciara Plunkett (KFM Radio), ‘The Final Countdown’ brought together notable activists and scholars to discuss reflections on 40 years of HIV and AIDS, It’s a Sin, and how we can end new HIV transmission by 2030.

At the event, advocates suggested that the Irish government must redouble its efforts against HIV and related stigma or risk missing a ‘crucial window’ to bring them to an end. The call to action comes amidst a renewed global commitment to ending HIV transmission by 2030, as UN Member States agreed on a series of ambitious steps to achieve this goal at the UN General Assembly 2021 High-Level Meeting on HIV/AIDS in New York.

Executive Director of HIV Ireland, Stephen O’Hare remarked that “Ireland must keep pace with our neighbours in the UK and the EU on ending HIV and related stigma.”

“This means increased investment in free, accessible, peer-led community-based testing services,” continued O’Hare. “Above all, it means real and sustained investment in shattering the wall of stigma around HIV and AIDS.”

Lisa Powell of Fast Track Cardiff and Vale, one of the founding members of Stonewall – the UK’s largest LGBTQ+ civil society organisation – spoke on the impact of Russell T Davies’ highly acclaimed series ‘It’s A Sin’ on which she acted as a historical consultant.

“If we are to persuade everyone that it is worthwhile getting tested, we need to ensure that everyone is getting the message. ‘It’s A Sin’ has given the message a real boost. We need to capitalise on that,” said Powell.

Professor Ann Nolan, Assistant Professor in Global Health and Director of the MSc in Global Health at the Trinity Centre for Global Health, recalled the grassroots activism of Gay Health Action in the early 80s, a precursor to organisations like HIV Ireland, in disseminating information about sexual health that was being left out of mainstream public health services.

Prof Nolan also called for a more inclusive and realistic view of the history of HIV and AIDS in Ireland, which she suggests is too often dominated by gay men. “Women were also active, but their history is much less visible,” she added. 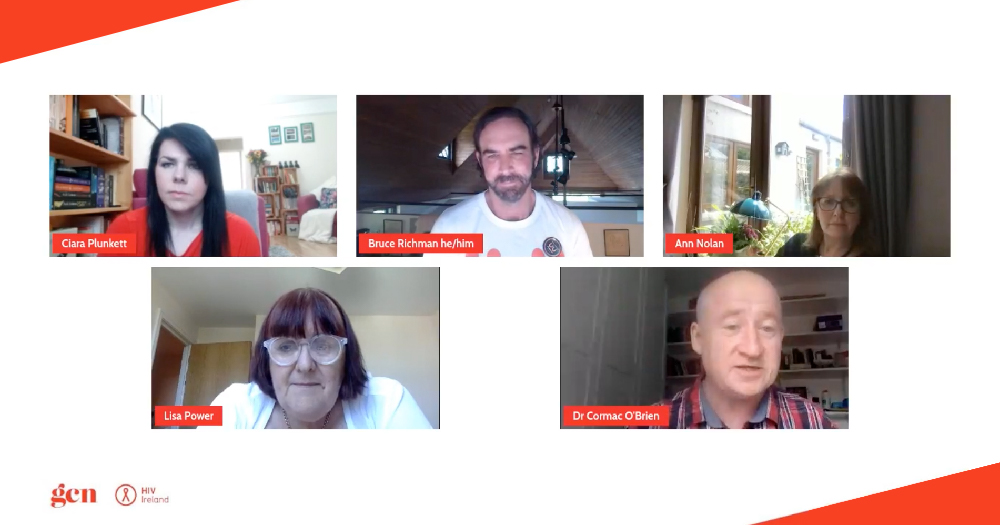 Dr Cormac O’Brien, Lecturer in Anglo-Irish Drama at UCD’s School of English, Drama, and Film, spoke on the worrying ways in which HIV and AIDS have been stigmatised in Irish literature and drama, often portraying “anachronistic”, “out-of-time” imagery of people who are “sick and dying.”

“If the culture is providing stigmatising, doom-laden, frightening representations all the time, then that’s the only way we are going to know about this disease,” he added.

Bruce Richman, founder of the US-based Prevention Access Campaign (PAC)discussed different ways in which messaging around HIV prevention and stigma could be used to bring an end to HIV and related stigma in the next ten years.

He spoke specifically about the U=U campaign (Undetectable equals Untransmittable) pioneered by PAC on a global scale to educate people that “if you are living with HIV, on effective medication and have achieved suppression of the virus in the body, you cannot pass on HIV.”

“The ‘UequalsU’ message needed to be institutionalised. We are using ‘UequalsU’ as a public health argument,” Richman said.

“If you ensure people with HIV stay healthy and have what we need to be undetectable [viral load]… we not only stay healthy, but we cannot pass on HIV, and that’s the most effective way to end the epidemic,” he added.

‘The Final Countdown’ was organised by HIV Ireland and GCN to mark Irish AIDS Day 2021.

You can watch it back here.

A volunteer in HIV since before it had a name, Lisa spent 14 years with Gay Switchboard, 17 years more with Terrence Higgins Trust and was one of the founders of Stonewall. She is a Trustee of Queer Britain and an Advisory Board member for Terrence Higgins Trust. She recently acted as advisor on the BBC’s groundbreaking “It’s a Sin” programme.

Assistant Professor in Global Health and Director of the MSc in Global Health at the Trinity Centre for Global Health (TCGH), Ann is a technical specialist in HIV and sexual health and a former Executive Director and Chairperson of HIV Ireland. She has been an advisor to Ireland’s International Development Cooperation programme at the Department of Foreign Affairs and Trade.

Lecturer in Anglo-Irish Drama in the School of English, Drama and Film at University College Dublin, Cormac specialises in modern and contemporary Irish drama with a comparative focus on British and American theatre. He also specialises in the interdisciplinary field of medical humanities, comparatively exploring Irish and other Western cultural responses to HIV and AIDS, predominantly in drama, fiction, cinema, and television

Donate to GCN at:  www.gcn.ie/support