2022 marks 34 years of World AIDS Day – a pioneering global health campaign first initiated by the World Health Organisation (WHO) in 1988. The global UNAIDS theme for 2022 is EQUALIZE. It is a call to action urging everyone to address the inequalities that are hampering our progress to end AIDS by 2030.

2022 also marks the 40 years since the first reports of HIV and AIDS in Ireland in 1982. HIV remains a significant public health issue in Ireland. If you would like to support our work, please donate today. 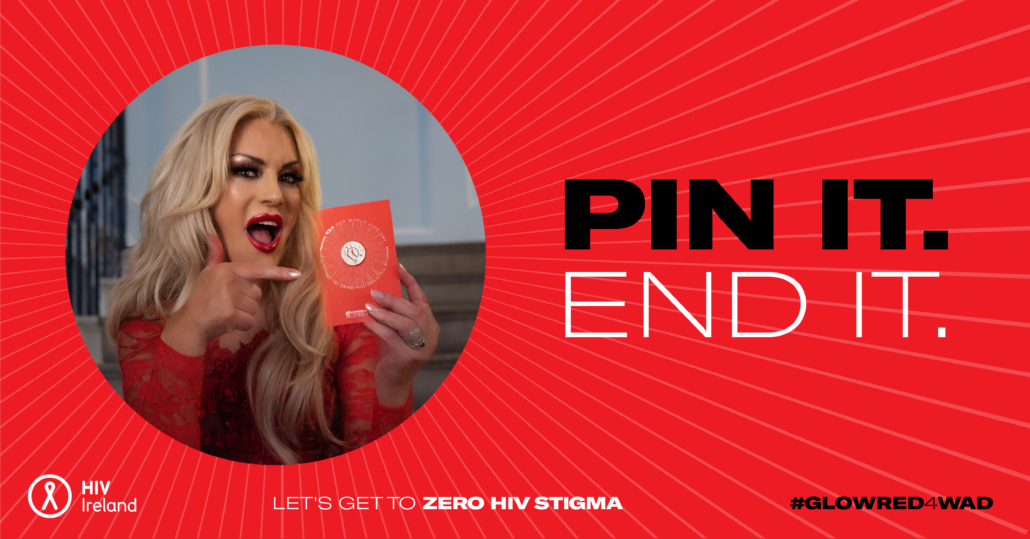 The campaign encompasses the lighting of buildings in red across Ireland, wearing red to show group/individual support, a limited edition enamel pin on sale to raise vital funds for HIV Ireland’s work, and a social media campaign #GLOWRED4WAD.

Find out more about the GLOW RED for World AIDS Day campaign and how you can get involved.

After a 3-year break due to COVID-19, our annual corporate fundraising gala is back! This is a unique opportunity to support the work of HIV Ireland while enjoying a fantastic night out in style in the wonderful surroundings of the Guinness Storehouse. 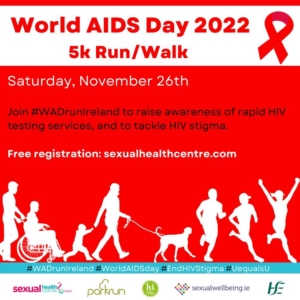 Become an Ambassador against HIV Stigma by joining the 2022 World AIDS Day Run (or walk).

On Saturday 26th November, the Sexual Health Centre will host a free 5K World AIDS Day run in conjunction with the HSE Sexual Health and Crisis Pregnancy Programme and Parkrun, in a bid to tackle HIV stigma and encourage people to test regularly.

Get more information and register today.

This year’s theme is ‘HIV in a time of Crisis‘.

Get more information about the event and register to attend. 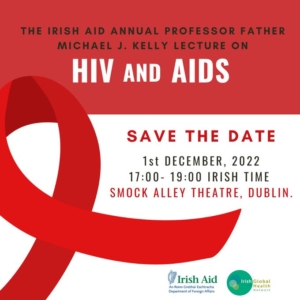 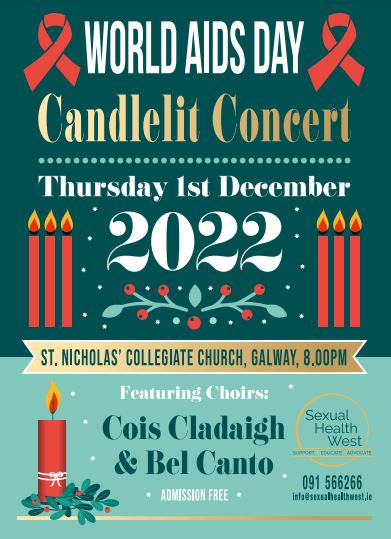 How To Tell A Secret, from Thursday 1st December

In this powerful hybrid and award-winning documentary, directors Anna Rodgers and Shaun Dunne use documentary, performance and genre blurring storytelling techniques to communicate a powerful message of what it is like to live with HIV in Ireland today. Featuring Veda Lady, Robbie Lawlor, Eva-Jane Gaffney, Jade Jordan and Lauren Larkin, the film also includes a dramatic tribute to Thom McGinty, aka The Diceman.

Produced by Zlata Filipovic for Invisible Thread Productions, the film will be released in select cinemas from 1st December to coincide with World AIDS Day 2022, including the IFI, Light House and Stella Cinemas in Dublin, the Pálás Cinema in Galway, the Gate Cinema in Cork, Omniplex in Limerick and Omniplex in Wexford. Watch the trailer here.  Book tickets here. 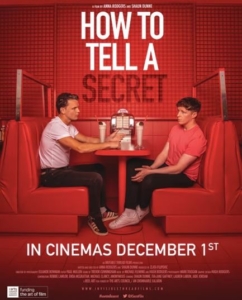 Launched on World AIDS Day 2021, this unique portrayal of people living with HIV in Ireland and first-of-its-kind exhibition has been touring in 2022, displayed in the Dublin Pride Hub in June, and for Culture Night at Outhouse LGBT Community Centre. Now the exhibition is off to Belfast for a private event hosted by The Rainbow Project at the Metropolitan Arts Centre (The MAC) on Saturday 3rd December to mark World AIDS Day 2022.

Find out more about the Living Project and get one of the limited edition Living Booklets. 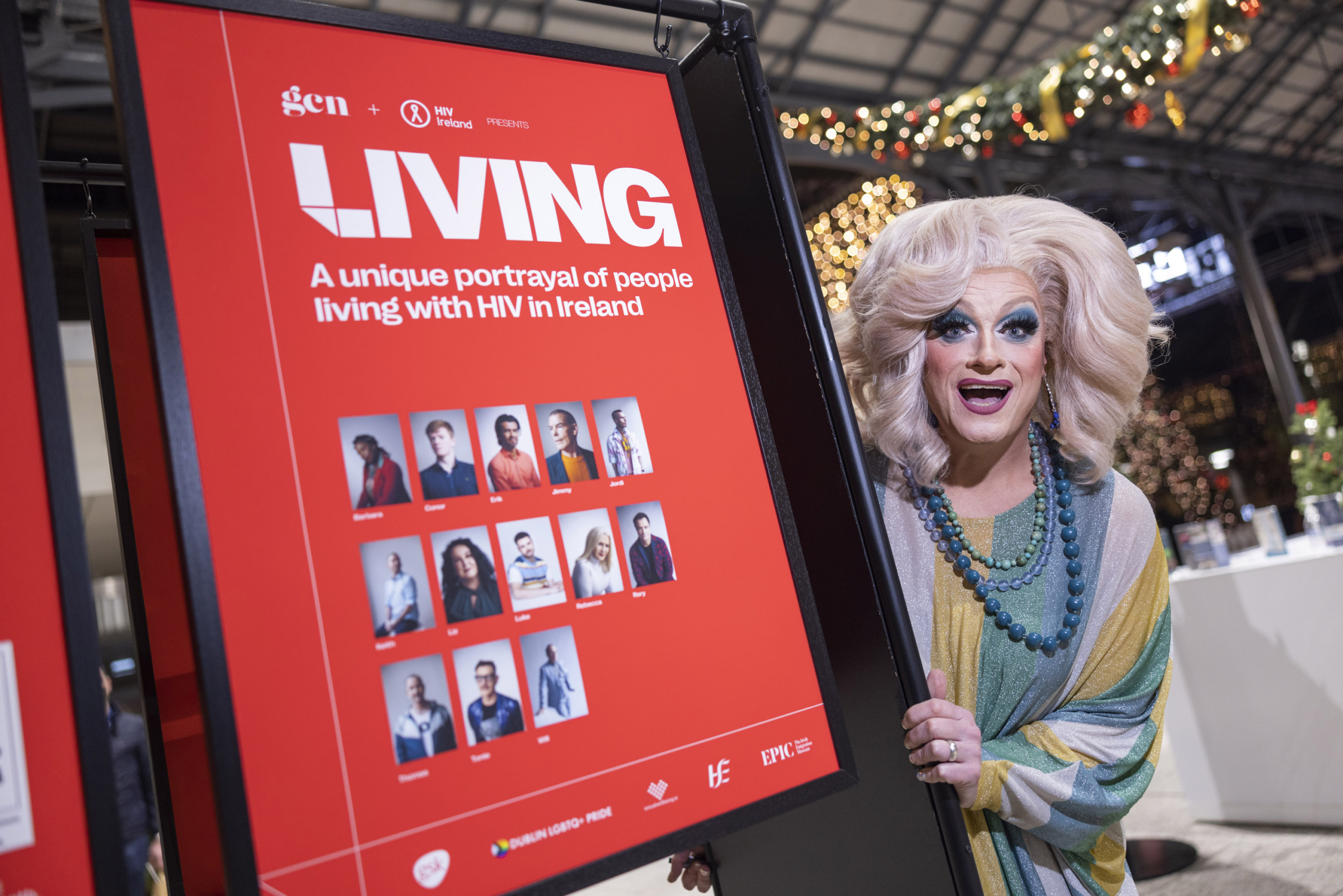 Host your own event

Do you want to host your own event to raise awareness about HIV in your organisation/workplace?

Host a ‘Wear Red‘ event in your workplace, college or school as part of our GLOW RED for World AIDS Day campaign and help raise the vital funds we need to end HIV-related stigma. We can supply Red Ribbons and posters which you can order through our Free Resources Service. Make it fun by having a best-dressed competition!

We offer educational talks for organisations (in-person or online) who want to learn more about HIV and support our work through fundraising initiatives and/or donations. Discover more about the Global targets to end AIDS and what we are doing in Ireland to get to Zero new HIV transmissions, and Zero Stigma and Discrimination. Limited dates available so early booking is advisable. Contact susan.donlon@hivireland.ie for more information.