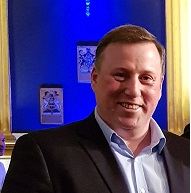 We are delighted to announce the appointment of Mr Stephen O’Hare to the position of Executive Director of HIV Ireland.

Stephen brings more than 15 years experience of leadership and advocacy within Ireland’s civil society sector. He joins the organisation following his most recent role as Chief Executive Officer at Transgender Equality Network Ireland (TENI). Previous roles include management and senior policy positions with the Irish Council for Civil Liberties, Pavee Point and the National Council for Ageing and Older People.

Stephen is a qualified barrister and social researcher with experience leading high profile initiatives to promote human rights, equality and inclusion. He has worked on numerous high profile campaigns including the referendum on Marriage Equality, the Convention on the Constitution and the referendum on Oireachtas Inquiries.

He has contributed to many key human rights and LGBTI+ strategic initiatives including the Review of the Gender Recognition Act 2015, the National LGBTI+ Strategy and the first and second examinations of Ireland under the UN’s Universal Periodic Review mechanism.

The Board and Staff of HIV Ireland would like to extend our warmest welcome to Stephen and wish him every success in his new role.