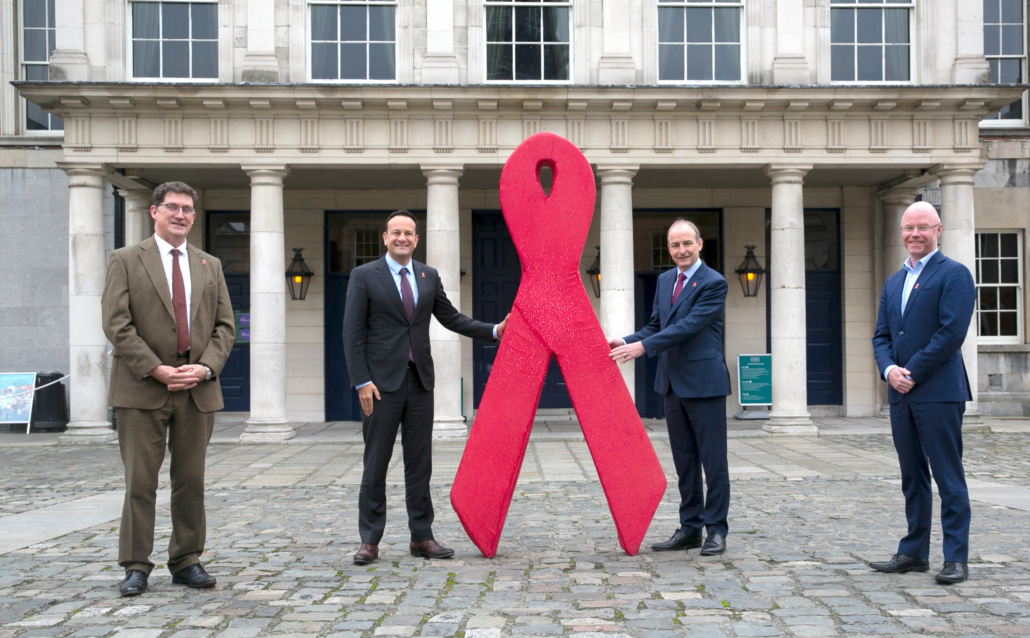 Landmark monuments and buildings around Ireland are set to light up in red today to mark World AIDS Day, 1st December. The initiative is being spearheaded by HIV Ireland as part of its Glow Red for World AIDS Day campaign.

At an event to mark World AIDS Day, Taoiseach Micheál Martin TD and Tánaiste Leo Varadkar TD were joined by Minister for the Environment, Climate and Communications Eamon Ryan TD and Minister for Health Stephen Donnelly TD at Dublin Castle to stand with the red ribbon, the internationally recognised symbol of solidarity with people living with and affected by HIV and AIDS.

Speaking ahead of the event, Chair of HIV Ireland Mr Bernard Condon said “This year marks the 40th Anniversary of the emergence of HIV and AIDS in 1981. Advances in both prevention and treatment means that we have all the tools we need to end new HIV transmissions. To be successful however, we must also tackle HIV-related stigma which continues to blight the lives of people living with HIV and provides unnecessary barriers to accessing testing and other preventive options which are freely available in Ireland.”

Outlining the Glow Red for World AIDS Day campaign, Executive Director of HIV Ireland Mr Stephen O’Hare noted that more than 50 buildings and monument around Ireland had agreed to light up in red as part of its campaign to shine a light on HIV-related stigma. Iconic landmarks include the fountain at Government Buildings, the US Embassy building at Ballsbridge, the Rock of Cashel, the Mansion House, Kilkenny Castle, the National Convention Centre and the Browne Doorway in Galway . They will be joined in supporting the initiative by a host of city and county council buildings and by high profile companies including Google, Deloitte, EY, Artur Cox, Indeed, State Street, PWC and Sky Ireland.

“People living with HIV often experience stigma” said Mr O’Hare. “Stigma arises from negative attitudes and beliefs. It is rooted in fear, misconceptions, or moral judgments. Stigma can lead to discrimination and exclusion. Experiencing HIV-related stigma may impact a person’s mental and emotional wellbeing. It may prevent them from accessing services or seeking opportunities” he added.

“Today we are asking people to wear red and, if they can, to donate to HIV Ireland’s Glow Red 4 World AIDS Day campaign to support our work in combating HIV and HIV-related stigma” continued Mr O’Hare.

As part of its programme of events, HIV Ireland will join Gay Community News in hosting a portrait exhibition entitled Living – A unique portrayal of people living with HIV in Ireland. The event will be hosted by Dublin-based drag artist Panti Bliss and takes place this evening (1st December) at 7pm in CHQ Building, Custom House Quay, D.1.

World AIDS Day has been observed every year since 1988 and is dedicated to raising awareness of HIV and AIDS. It is also a day of remembrance for those who have lost their lives since HIV first emerged as a public health emergency 40 years ago.